Corrosion is defined as the deterioration of materials through chemical or electrochemical attack.  Corrosion requires the presence of both oxygen and water. Oxygen is available from the air but levels may be increased, especially in water by agitation. Water can be supplied by immersion, washing down, rainfall, dew and high relative humidity. Rainfall may not contribute to the corrosion process as it may wash away contaminants on the metal surfaces.  Dew and high relative humidity however form a layer of moisture on the metal surface that can significantly influence the corrosion process.

On a macro scale, the rate of corrosion can be classified into categories, eg AS/NZS 2312 uses seven categories. 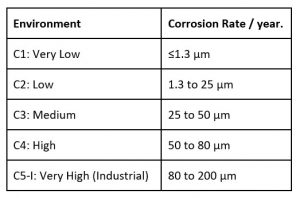 In addition to macro effects, local effects can significantly affect the rate of corrosion and convert a mild category into an aggressive corrosive environment. These can include:-

Some of the direct consequences of steel corrosion include:-

The options available for the remediation of corroded members include:

Inspection of industrial structures utilises a condition rating system to track the degradation level of steel and concrete over time, using a 1 to 5 scale rating (pristine to unserviceable). The system allows for a consistent rating from any inspecting engineers. The paper gives background on the condition rating from the inspection system developed by ASPEC’s engineers.

Even though the damaged structure may appear to be intact, the ability to resist earthquake loads, wind loads and other abnormal loads is severely reduced and catastrophic failure may result without warning.

Welding and fabrication defects can greatly affect the performance and longevity of steel structures. Having an understanding of the various defects, their causes and remedies can help to ensure higher-quality and longer lasting structures.